123cargo/BursaTransport is part of the Alpega group of companies which is dedicated to electronic services for transport and logistics operators.

The Alpega group includes the Teleroute, Wtransnet and 123cargo/BursaTransport freight exchanges. Teleroute is the oldest European exchange in operation, a well-known presence in the western part of Europe, and Wtransnet is the market leader in the Iberian Peninsula and became part of the Alpega group in August of 2018.

In this article, we take a look at the statistics that defined the field of road freight transport in 2020 on 123cargo/BursaTransport.

The emergence of the COVID-19 pandemic has caused a major shock for the European and global economy, with very serious socio-economic consequences. The field of transport has not been spared and 123cargo/BursaTransport has taken a number of measures to support carriers and customers. The initiatives taken by BursaTransport in the spring of 2020 were:

The COVID-19 pandemic has resulted in a reduction in the domestic and international road freight transport as reflected within BursaTransport by users’ actions.

Thus, on 123cargo/BursaTransport, the most used freight exchange in Romania, 6.81 million goods were published in 2020, 7.1% fewer than the year before. 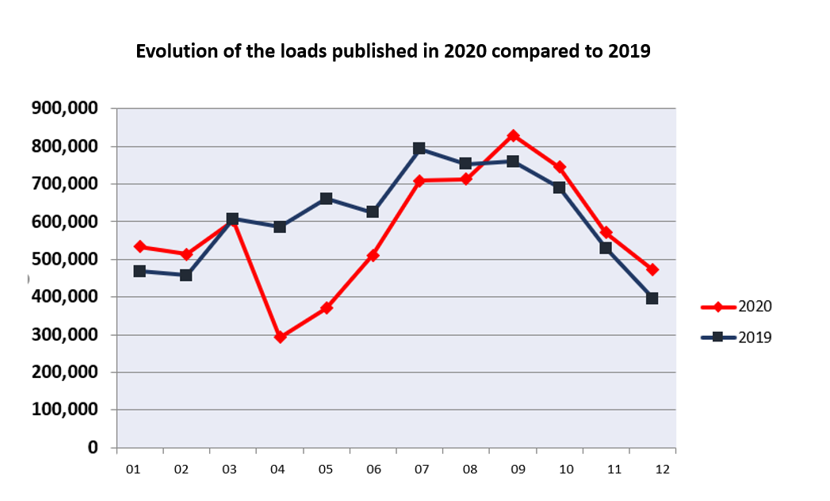 With the establishment of the state of emergency in Romania, in mid-March, the goods published on 123cargo/BursaTransport saw a strong downward trend, and, in April of 2020, 50% fewer goods were published on the exchange than in April of 2019.

However, since June, with the relaxation of the measures for the prevention of the spread of Sars-Cov-2, there has been a recovery in terms of the number of goods published. Thus, the month with the most goods published on 123cargo/BursaTransport was September, when approximately 830,000 goods were published on the platform, up by 9% from September of the year before.

82.5% of the goods published were deleted before the expiry. Taking into account our statistics according to which, for 65% of the goods deleted, a transport solution has been found, that means that, on the 123cargo/BursaTransport platform, an average number of about 14,600 transactions may have been concluded on a daily basis. 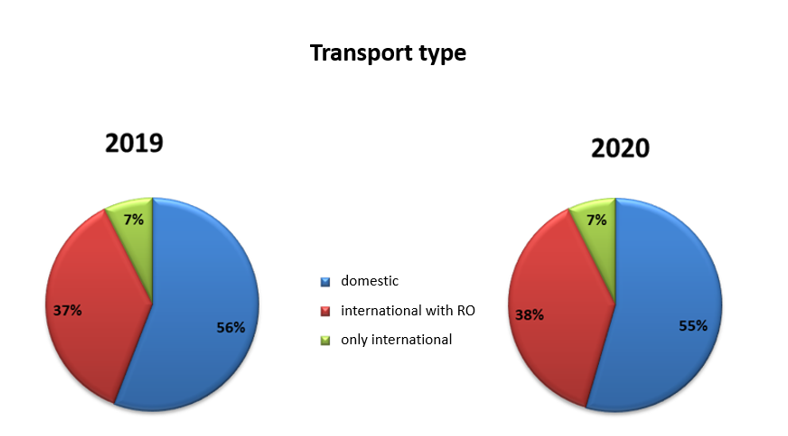 In 2020 there was a decrease in the number of goods posted for domestic routes, but also in terms of the imports and goods from the segment of external routes not linked to Romania, which was caused by the Sars-Cov-2 pandemic and the measures designed to prevent the spread of the virus. However, imports from Hungary increased significantly, which may have been generated by our constant efforts to increase the number of Hungarian users.

In the light of Brexit, freight transport to and from the UK was one of the major concerns of 2020. Based on the statistics obtained as a result of 123cargo/BursaTransport posting, the months of November and December of 2020 showed a peak in terms of the goods posted from and to the UK as the number of UK-linked carriers began to decline at the end of 2020. 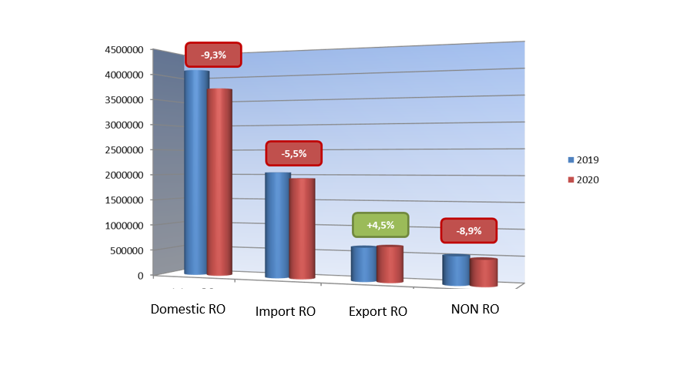 The number of trucks published in 2020 was 463,000, with a decrease recorded during the state of emergency in April and a stronger seasonal variation than in the case of cargo posting. 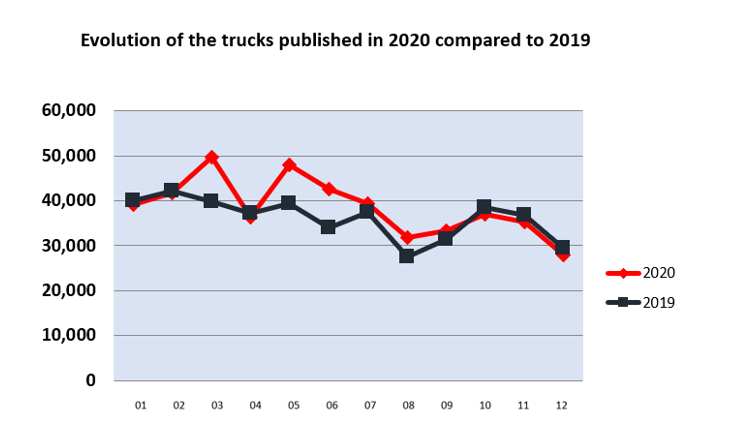 In general, when there is more cargo on the exchange, the published number of trucks decreases, seeing as carriers quickly find cargo and no longer need to publish their trucks. The trend was also confirmed in 2020.

21% of the trucks registered on the exchange in 2020 were published with alternative destinations, which indicates that carriers do appreciate and use this facility.

123cargo/BursaTransport strengthened its position on the external market, and, in 2020, it had operational offices in Poland, Hungary and Bulgaria. 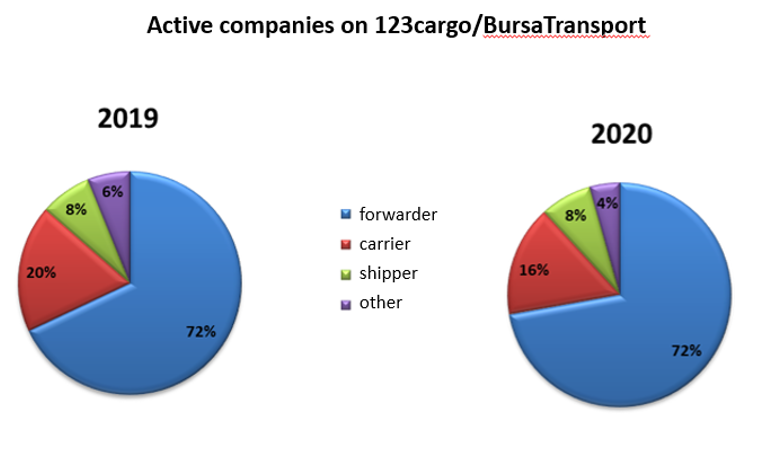 The verification of other members’ information was used in 2020 similar to the previous year, as follows:

In 2020, the number of declarations concerning the late payment of the transport invoice dropped significantly compared to 2019, by 23.5%. Of these, 92.10% were settled by payment within 8 days.

Over time 123cargo/BursaTransport has conducted information campaigns as regards the risks, as well as the safety measures which its customers could take to prevent unfavourable situations. In order to revisit our tabs on safety and the desirable measures to be taken by you in your operating activity, please click here.

Thanks to the safety measures implemented, there were no reported cases of cargo theft in 2020 of a total of 6.81 million goods posted.

Among the novelties implemented by 123cargo/BursaTransport in 2020, in addition to those related to the pandemic, featured at the beginning of the article, we would like to list the following:

BursaTransport has been operating on the Romanian market for 20 years. Thank you for being part of the BursaTransport community; we assure you that we will continue to be there for you, providing you with quality services and maintaining the same high level of professionalism to which you are accustomed.