The new scoring of 123cargo

We remind you that scoring is a 123cargo tool for evaluating the future business partner. Either future transport customer or future transport subcontractor. Scoring is a 123cargo own brand tool. It is based entirely on the information about the company in the application’s database. The scoring is not intended and designed to give a general rating to a company, such as financial risk reports. The scoring, with all difficulties of understanding and use, found over time, remains a tool for knowing the possible business partner after its business activity on 123cargo. The scoring is automatically calculated at the end of each calendar day for all companies registered in 123cargo, except for:

We repeat what we continuously stated: the decision to enter into a commercial transaction with the future partner is entirely the responsibility of each company and 123cargo offers only an indicative evaluation tool, through the use of the application, not through the operational and financial results of the future partner.

The old scoring system, in place for more than 10 years, has been replaced. By replacing it, several objectives were met, partly requested by the carriers:

What are the differences from the former, replaced scoring system:

The rating for contractual behavior as a client. 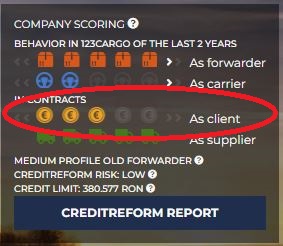 Important clarification: the rating of contractual behavior as client has the value N/A if the rating of activity as forwarder has ZERO stars. In translation, if that company did not act as a forwarder, but only as a carrier, we could say, we do not have available information to evaluate its behavior as a client in agreements. There are honorable transport companies with a very good reputation on the transport market, which have the rating of N/A for contractual behavior as client, because the only activity manifested within 123cargo was as carrier, meaning as supplier. However, if that company had a single payment incident claimed against it, the reserved attitude of 123cargo is abandoned and the notation N/A is replaced by an expected very weak rating.

Contractual behavior as a supplier. The active transport incidents are taken into consideration (they are outdated in 6 months since the date of publication and disappear from the list of transport incidents) but also the rating of the activity as a carrier. When there is no information about this activity (zero rating), regarding the contractual behavior as a supplier, the N/A will be displayed.

Ratings of activity in 123cargo as a forwarder, respectively as a carrier. 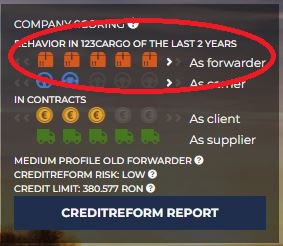 In the new scoring, there are companies that were decreased from 5-star rating in the old scoring, to only 3 stars in the new scoring, to the contractual behavior rating as a client. This does not indicate in any way a worsening of the payment system executed by that company, but a rethinking of these ratings, in order to scatter more judiciously on a scale from zero to 5 stars.

We reiterate an important aspect: the ratings must be considered as a whole; a contractual rating as a weak client with a weak activity as a forwarder, in the opinion of 123cargo, does not exclude a successful future transaction with that company, but the ratings suggest otherwise. The decision is up to the manager of the future subcontractor. On the other hand, the same weak contractual rating as a client together with a consistent activity as a forwarder, indicates only possible future difficulties in collecting the transport invoice.

In the end, 123cargo acknowledges especially in front of the new registered in the platform, that the scoring mechanism may be considered difficult to understand, too sophisticated, and preferable to be replaced with changed information about the future partner on social networks. The difference is that behind our ratings lie calculations based on figures and indubitable traces of activity, while the assessments exchanged "collegially" on social platforms have in principle nothing but subjective and personal assessments. Again, the decision to go further, or on which of the information evoked here we will rely, is difficult and remains the prerogative of the company manager trying to document himself.

For those who have difficulties in understanding and using the scoring, we express our availability to answer promptly to all the request or queries received. 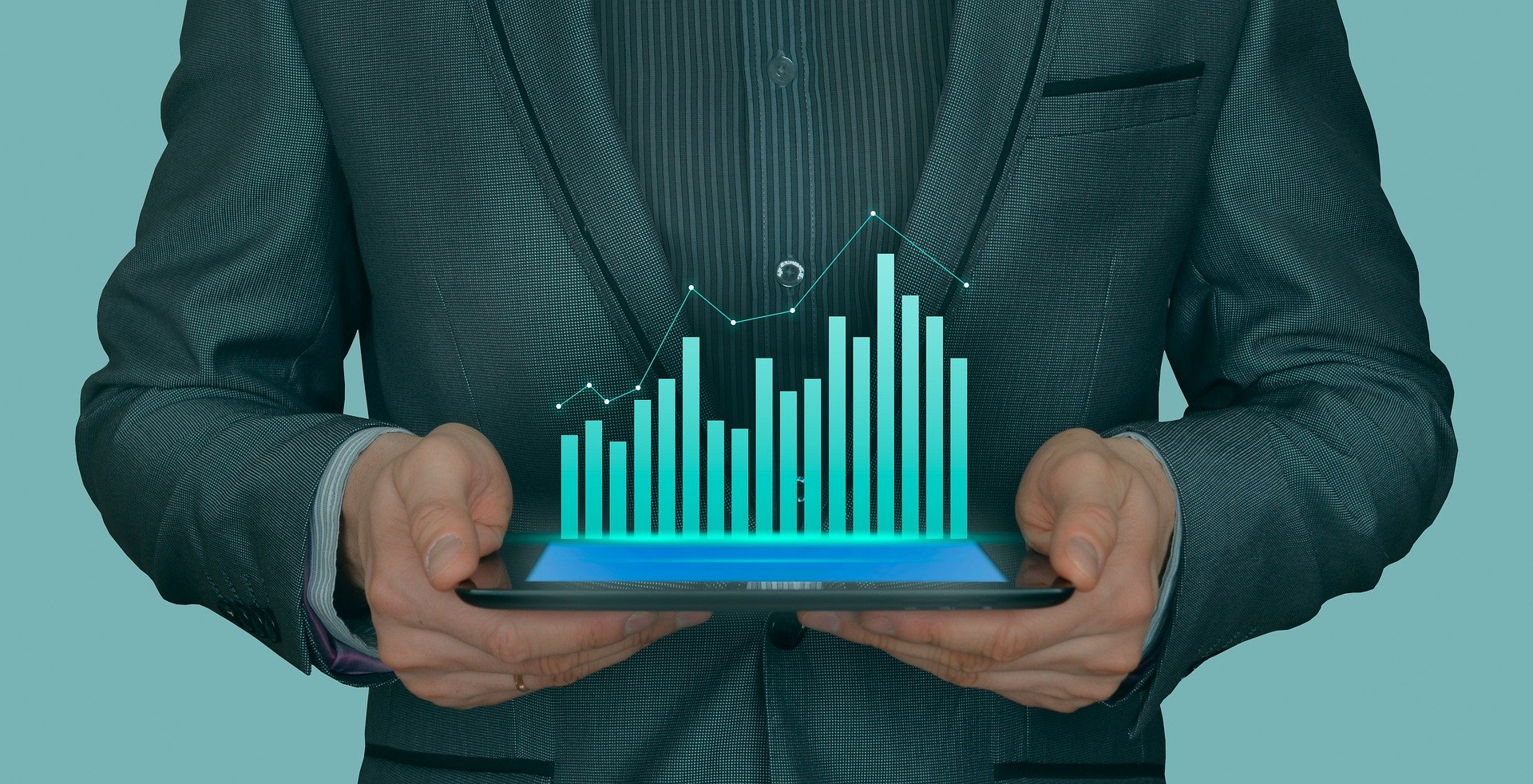